A 'pipe dream' is defined by the Merriam-Webster Online Dictionary as "an illusory or fantastic plan, hope, or story." It is a phrase some people have used to describe the hyperloop, a futuristic form of transportation that aims to send specially designed trains through a closed tube at hundreds of miles per hour. It is a dream that, should it ever come to fruition, will require hundreds of miles of carbon tubing.

The reason many people consider the hyperloop nothing more than a pipe dream is the fact that, as of yet, it’s just a concept in the mind of eccentric billionaire and Tesla founder Elon Musk. Despite a number of hyperloop companies securing hundreds of millions of dollars in investments, there isn't a single full-scale prototype in existence right now. They are working on one in France, but it’s a long way from being completed.

The difficulty with taking the project seriously is the fact that so many scientists, engineers, and tech companies are jumping on board with the hyperloop concept and just assuming it will work – because theoretically, it makes sense. Unfortunately, a lot of things make sense on paper only to end up flopping in the real world. Hopefully the hyperloop will not suffer the same fate.

Some good news in all the hype surrounding the hyperloop is the fact that pursuing the concept is great for the composites industry. Like many ideas birthed in the mind of Elon Musk, making the hyperloop a reality is going to require a heavy reliance on composite materials. Carbon tubing is just the start, and even that is a monumental undertaking.

Creating carbon tubing big enough to accommodate a hyperloop train is something that has never been done before. The engineers in France had to come up with a special manufacturing process to get the finished product they wanted. They will eventually have to figure out how to mass-produce large sections of tubing if the hyperloop is to become a worldwide transportation phenomenon.

Above and beyond just the hyperloop's tube, composites will be the building blocks of everything from train bodies, to the smallest parts hidden deep inside. Engineers will be using composites to make seats, interior and exterior panels, control panels, cabinetry, and just about everything else on a typical hyperloop train. Remember, to reach the levels of speed Musk has envisioned requires ultralight materials that are just as strong as steel and aluminum. Composites like carbon fiber fit the bill.

We join everyone else interested in this project in hoping that it actually succeeds. But if it doesn't, what next? Well, we will at least be able to walk away with a lot of new knowledge about how to manufacture and utilize composite materials like carbon fiber. Along the way we are sure to learn more about carbon nanotubes, carbon tow, mass-producing tubes and sheets, and so much more. We might even be introduced to new composite materials we don’t yet know of. 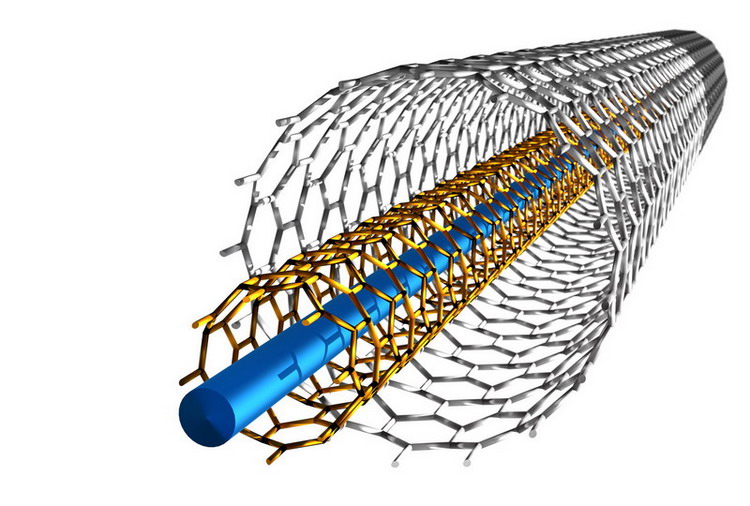 Even if the hyperloop turns out to be an unachievable pipe dream, it will still help the composites industry in many invaluable ways. That is the price of thinking big – and risking utter failure in the process. Sometimes you think big and your dreams come true. Other times you fail, but learn enough to help in the pursuit of the next big thing. That's what investing so much in the hyperloop is all about.

Our Top Ten Most Popular Tubes in March

Rock West Composites is now offering an extensive collection of PRO-SET epoxies and adhesives, which are a great solution for composite lamination, fabrication, and assembly. These epoxies can withstand the harshest of environments and are optimal for today’s high-performance composites manufacturing. PRO-SET epoxies have a long shelf live and can be stored at room temperature. We offer multiple types of epoxies depending on your application: laminating, infusion, high temperature and adhesives. The PRO-SET laminating epoxies are designed for laminating reinforcement fabrics, resin infusion processes, and bonding many materials, including metal, core materials, and even wood. They cure at room temperature. You can mix and match resins and hardeners to create your own custom blend of cure times and viscosity. With excellent moisture resistance, they are tough against heat and structural fatigue. We also carry PRO-SET absolute clear laminating epoxies that offer colorless clarity and UV stability in addition to offering excellent sandability. Our PRO-SET infusion epoxies meet strong structural requirements with a room temperature cure and have superior strength with an elevated temperature cure. These are very low viscosity systems designed to work well with modern infusion processes. PRO-SET high-temperature epoxies offer excellent thermal stability and work when cosmetics matter. These resins are stable in temperatures up to 300°F (149°C) and are moisture, heat and fatigue resistant. PRO-SET adhesives are pre-thickened, two-part epoxy adhesives used for secondary bonding of laminated composites as well as steel, aluminum, cast iron, concrete, stone, and most woods. They are great for assemblies, offer a wide variety of options (speed, strength, color), and require no welding, fasteners or rivets. Designed for the professional but also excellent for the DIYer, this new series we offer can meet your projects most demanding structural needs. Check
Read more...

FOR IMMEDIATE RELEASE Rock West Composites Moves Into Its New San Diego Headquarters Rock West Composites moved this month to its new corporate headquarters, a 107,000 sq. ft. facility in San Diego, California. The company is expanding to accommodate new staff, add manufacturing space, grow capability for large-scale composites manufacturing, and meet the needs of its expanding business. San Diego, CA (PRWEB) February ##, 2021 – Rock West Composites (RWC) has moved this month into its new corporate headquarters at 7625 Panasonic Way in San Diego, California, a facility more than three times larger than its previous headquarters. While the company retains its locations in Salt Lake City, UT and Tijuana, Mexico, RWC’s former San Diego location on Precision Park Lane will be vacated in favor of the new building. With 107,000 sq. ft. of total space, there is 20,000 sq. ft. of office space, 80,000 sq. ft. of manufacturing space, and an additional 7,000 sq. ft. for general warehouse use. The entire space is not fully utilized, and the company is positioned for significant growth. This building will house the corporate offices, engineering, product development, and manufacturing centered around prototyping and production. The plant will be able to accommodate large scale composites production and significant new capital equipment with the intention of growing the company’s already expansive capabilities to meet the space requirements of the expanding business. Its location is also close to the border with easy access to the company’s Tijuana plant, which specializes in high-volume production. The new facility has an adaptive infrastructure that allows for rapid refitting of manufacturing areas to accommodate new program requirements. There are clean room areas with varying levels of classification to accommodate customer needs. “We are excited to start the new year in our new location,” said Jim Gormican, CEO of Rock West Composites. “As our company
Read more...
February 8, 2021

FOR IMMEDIATE RELEASE Rock West Composites Adds “Build Your Own Tube” Feature to Its Online Offering This month Rock West Composites has added a feature on its website allowing customers to define their own filament wound tube specifications, enabling a build-to-order ecommerce transaction with immediate check out. Currently 75 mandrels and two materials are available with three distinct performance characteristics and nearly infinite wall thickness options. Salt Lake City, UT (PRWEB) February 8, 2021 – This month Rock West Composites (RWC) announces the addition of a Build Your Own Tube feature to its website. The tool allows the customer to define specific attributes they need for their custom tube, provides a range of pricing based on the volume of the order, and then allows for immediate check out. It is fast and easy for customers who know exactly what they need but can’t find an off-the-shelf solution. The customer can define the interior diameter, wall thickness, tube length, material, and key performance characteristic of their custom tube order. Current materials available include intermediate modulus carbon fiber and fiberglass (E-glass). Performance characteristics include bending stiffness, torque, and internal pressure. Tubes are manufactured using the filament winding process. Checkout is processed as soon as the customer is ready, and shipping is handled separately. In addition to the 450 base options currently available, tubes can be customized even further by specifying almost any wall thickness. RWC has plans to further expand the selection. This is only a small fraction of the off-the-self and customization options that RWC can offer customers. “Our customers have asked for the ability to get fast pricing for custom work and easy checkout via our website, and this is answering that request,” said Dave Erickson, General Manager of the Salt Lake City facility. “Ecommerce innovation is how we grow our business and help our
Read more...

Rock West has one of the most extensive offerings of prepreg on the market - over 25 material options. Even better, you can purchase by the linear yard - no minimum quantities! Of course, the more you buy, the better the price so feel free to pick up a whole roll. Since prepregs begin to cure once out of the freezer, our materials can be shipped with dry ice to protect your purchase if you choose it. In fact, we recommend it. If you need further verification that the material wasn't compromised during the shipping process, we also offer a temperature recorder. If you require certifications, we have supplier-provided Material Certifications and RWC-provided Certificates of Conformance. We highly recommend expedited shipping, and while we can ship over the weekend, we do not recommend it due to the risk of missed delivery. During the order process you can ask us to hold the shipment until the following business day just to be sure if arrives on a work day. If you aren't sure about the best material for your project, we offer sample packs so you can get a variety of 6" x 6" swatches. Our materials include: Standard Modulus Carbon Fiber Unidirectional Prepregs Standard Modulus Carbon Fiber Woven Prepregs Intermediate Modulus Carbon Fiber Prepregs High Modulus Carbon Fiber Prepregs Fiberglass Prepregs (Uni & Fabric) Other Prepregs & Film Adhesives So take advantage of all the best prepreg offerings on the market, for your prototypes and other small projects. Buying from RWC is more cost effective due to minimum buys and shelf life. And since we turn over the prepreg at a regular pace for most materials, our materials are current and almost always in stock. *Please keep in mind that all prepreg sales are final, and we do not refund or accept returns on this product. We do not offer outlive tracking
Read more...