Why RWC Won a CMS Gold Award from CERN

As we announced on social media earlier this month, Rock West Composites (RWC) received the CMS Gold Award for Industry from CERN for “excellence in collaborative design finalization and subsequent fabrication of the BTL-Tracker Support Tube Prototype.” The prototype was designed and built for the CMS (Compact Muon Solenoid) detector. Rock West Composites was nominated for the award by Purdue University, with whom we worked on this complex and difficult project.

Rock West was one of five companies, and the only US company, to get one of these prestigious awards for 2022. But what’s really interesting is the innovation that enabled this project to meet its objectives. The demonstration tube—2.4 meters in diameter by 1 meter long—had to meet all technical requirements, using tools and processes that were scalable to the future version that will be 5.2 meters long, PLUS remain affordable. The length of the future full-scale tube significantly magnifies the complexity and cost.

The prototype required collaboration with Purdue University to configure the design for manufacturing. If the composite laminates had been laid up traditionally, the prototype would have been 8 to 20 times more expensive. It would also would have been more challenging to hold an exact diameter since curved composite laminates distort when cured. The solution the Purdue/RWC team devised was to machine the circumferential stiffeners as precision arc segments from a thick laminate of carbon fiber (instead of laying them up on a round mold). This took advantage of the in-plane properties of the laminate, namely, isotropy and low coefficient of thermal expansion (CTE). This avoided the complications due to the high CTE through-thickness. Building in arc segments also allowed for modularity in the manufacturing process, avoiding very large (expensive) tools and easing construction. 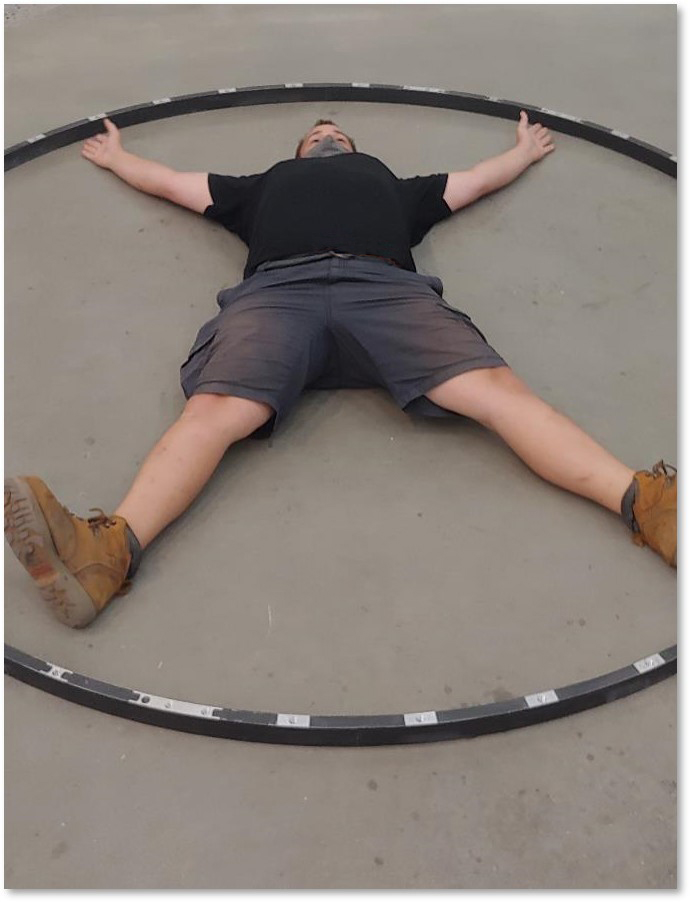 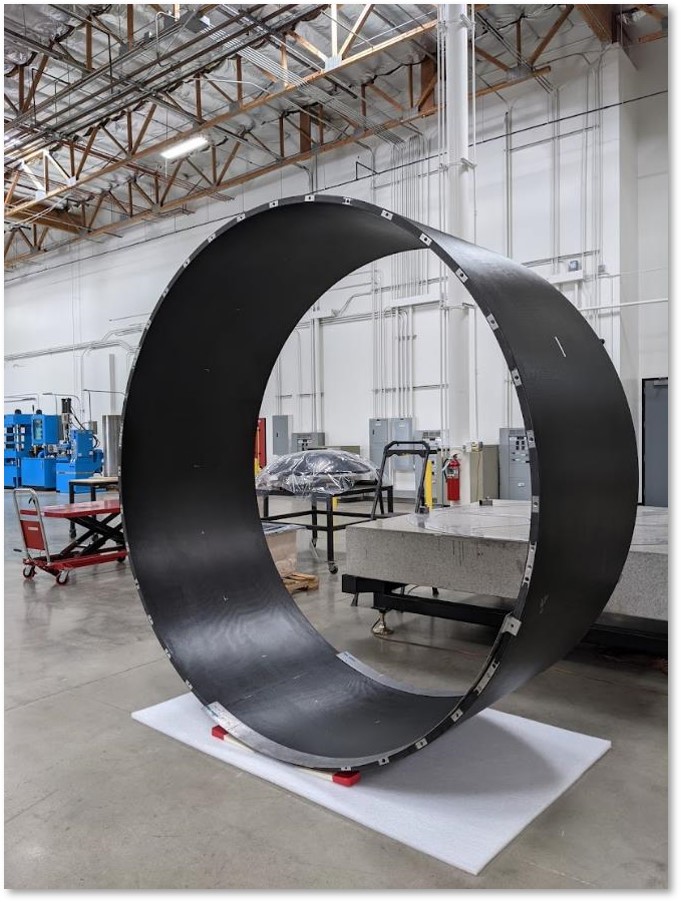 The BTL Tracker Support Tube prototype appeared as a simple cylinder from the outside, but it had multiple circumferential stiffeners, 100s of inserts, extremely stiff rails for instrument loading, and lengthwise splice plates. It met all CTE, stiffness and dimensional tolerances- as well as budget and schedule. RWC’s Director of Product Development, John Marks, worked closely along with team at Purdue University, Dr. Andreas Jung and Dr. Ben Denos. RWC collaborated with Purdue to have them do the tool design which saved budget and helped Purdue fund its team. Our RWC technicians, including Chad Williams, Lee Bridges, and Jose San Vincente, skillfully executed the prototype.

“Starting in 2000, the CMS Collaboration has honored industrial companies that have made outstanding contributions to the construction of the experiment with the CMS Gold Award. Companies who have demonstrated their excellence and engagement and who provide parts within specifications and on schedule are considered for this award.” - CERN/CMS

We are particularly proud of this award not only because of the technical challenges this program presented, but because of our successful collaboration with the team at Purdue. Thanks to the Purdue team for the nomination and for all our colleagues who helped make this program succeed!

Composites are typically used as a material that is both lightweight and strong. There are many major applications composites can be used for, like marine or space technology. Even then, it is important to admire the smaller, everyday projects for which anyone can use our composites. Meet John Kimball, our Technical & Applications Specialist. He finds joy in working with carbon fiber and likes to utilize it in his own personal projects. Ideally, he likes to create any product that benefits from not only the capabilities of carbon fiber, but its futuristic look as well. Two years ago, John started a project utilizing one of our products to create a knife, which is a perfect application for carbon fiber. John Kimball’s Knife He initially began this project with Rock West’s release of a new product, carbon fiber chip board, a few years ago. This chip board is known as “forged carbon” or “Damascus carbon,” which is short strands of carbon fiber pressed into a plate. He explains his creation process as, “I just dissembled the old knife and traced the general shape from the original handle pieces, then used sandpaper and hand grinders to finalize the profile. After the shape was finished, I used fine sandpaper to remove the scratches and then used a polishing compound to give it a nice smooth finish. Locating the screw holes was the most challenging part as all three holes need to meet a very tight tolerance.” Amazingly, even after two years have passed, he says the knife remains in great condition. Rock West is always encouraging engineers and DIYers alike to try utilizing composites outside of major projects. There are many simple items that could benefit from a material that is lightweight and strong, like pens, bows, or in this case, a knife
Read more...

Since the reformation of Rock West Composites Marine Division in August of 2021, we have received orders from two proven, trustworthy brands within diving’s Spearfishing market sector. Rock West is now a proud supplier of pole spear and dive fin components to these high profile, reputable OEMs. Late last year, Rock West Marine was approached by one of the largest high-end pole spear brands to develop precision tubes to their brand requirements. We received a paid development order to make specific, same diameter roll wrapped and filament wound composite tubes to perform a head-to-head comparison study. As part of their qualification process, our customer ordered enough sample tubes to perform field testing with their professional staff and athletes. Both field tests and static lab tests were run in parallel. Our customer diligently evaluated performance before choosing the optimal solution and then placed a second small production order with RW early this year 2022. Our customer is happy with Rock West's performance and is placing additional orders for tubes of this qualified design in the future. New designs for pole spear tubing and other related products are being quoted. Eric Thorstensen, the GM of the Marine division, sends a big thank you to Brian Shelby and Anthony Fairhurst for technically heading up development and delivering our first pole spear production order to our customer. In August of 2021 Rock West Marine put together a small R&D tiger team lead by Ethan Gormican to develop two different (medium and soft) flex carbon composite fin blades to offer future OEM customers. Rock West Marine attended DEMA (Diving Equipment & Marketing Association) Show in Las Vegas last year and showed our newly designed fin blades, along with other products. We received excellent feedback from interested OEM’s, dive shops and individuals confirming our entry into this market space. Eric thanks Julia Willis, Ethan Gormican, Brian Shelby, and Rylan Hayes
Read more...

At Rock West’s new headquarters, we have an RF test lab to support our many radome, antenna, and integrated RF structure programs. Recently we had a radome that required physical characterization of performance as part of its testing and verification plan. For this particular program, the radome provides high-performance, low loss protection for modern radar equipment. It has both military and commercial applications and is built under the support of solution provider R4 Integration, Inc. The radome is a multi-layer sandwich construction using low dielectric materials that are optimized to provide low transmission loss over wide broadband frequencies. This customer had narrow frequency bands of interest, and we were able to tune the radome for best performance within those specific frequency bands. Radome being mounted on test frame This program required physical test verification at a large amount of view angles, to map the radome’s performance over the entire surface. To test many view angles efficiently, our team had commissioned a custom structure to position the radome at 5 degree increments in both the azimuthal and elevation planes. It’s built mostly of wood and fiberglass to minimize structural RF interference. These are images from the testing process. Transmission Loss testing for radome at different view angles The successful testing and characterization of this radome enabled our customer to provide system-level performance feedback to their customer, meeting requirements for both the airborne terminal and the satellite-based communication systems. Rock West produces radomes from L-band to Ka-band with transmission loss typically below -1.0 dB, with many radomes tuned for loss below -0.5 dB in primary transmit and receive bands. Our in-house testing capability enables us to quickly test prototypes, shorten program schedules and reduce risk for programs with strict RF requirements. This radome is designed,
Read more...

Rock West has been in business for 15 years! The business was started by Jim Gormican and Keith Loss, two former colleagues, who decided to pursue an entrepreneurial endeavor together in Jim’s garage in late 2006. Since then, Rock West has grown into a business with four locations and nearly 200 people. From the Garage to the New Headquarters in 15 Years The initial work was centered around aerospace engineering and the commercialization of carbon fiber composites, which had been historically expensive, too expensive to use beyond specific, highly demanding applications. The business grew in 2009 through the acquisition of the former Maclean Composites in Salt Lake City, and the Rock West Composites brand was born. The new office pursued the online sales of carbon tubing and pioneered ecommerce for composites. Ecommerce Pioneer: flashback from a decade ago (left) to our current site (right) Ecommerce operations are located in our Salt Lake City facility (bottom right) Joining the Rock West team shortly thereafter was a group of applied sensor specialists located in Santa Barbara. They became the Rock West Solutions division. In 2017, the business launched a venture in Mexico to help reduce labor costs while allowing easy access to facilities. As part of the CaliBaja Mega Region, Rock West is working to re-shore jobs that have gone offshore, bringing work back to US in partnership with our neighbors in Mexico. Santa Barbara office (left), Baja California (right) Jump ahead to today and our headquarters in San Diego is now in over 100,000 square feet of office and manufacturing space. Our Salt Lake City facility has expanded to encompass its entire building. Santa Barbara has grown to include more office space and new secured labs. Tijuana has continued to expand and improve its facility and equipment. Rock West has come a far way from the original garage office. Facilities: San Diego warehouse (top left), Salt Lake City
Read more...