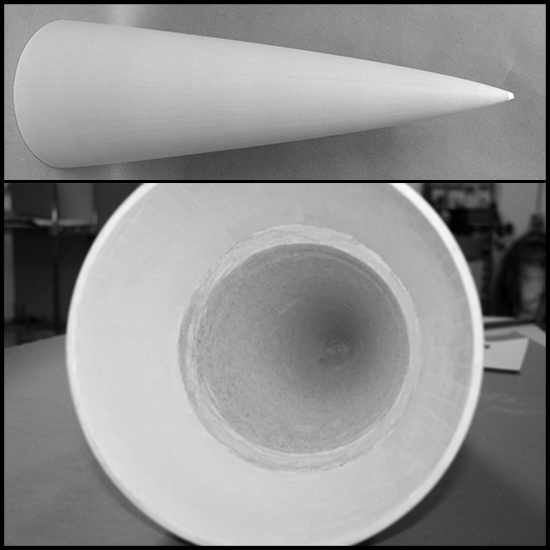 Flying at supersonic speeds means the missile or aircraft will experience very high temperatures, often exceeding 1000°F (540°C); especially at its nose tip, where a radome is often included. Nose radomes on supersonic missiles are typically made from ceramic materials. Ceramic radomes flying today are monolithic; that is, made from a single layer of material. (CorningwareTM is an example of a monolithic material similar to that used for ceramic nose radomes.) Being a single layer inherently limits the bandwidth of the radome, due to the physics of RF energy propagation.

The US Navy wanted a nose radome that could withstand the high temperatures of supersonic flight AND have broader bandwidth. To achieve broader bandwidth in a radome, engineers traditionally look to sandwich constructions (two skins “sandwiching” a lightweight core). Broadband radomes on traditional, subsonic missiles and aircraft typically have sandwich constructions. However, ceramic materials cannot be made into sandwich structures due to the brittle nature and high processing temperatures.

Rock West Composites developed a high temperature “tuning layer” that can be added to a monolithic radome. The layer is non-structural, but it can be adjusted in its dielectric constant and thickness to optimize the performance of the structure radome shell. This tuning layer can withstand high temperatures itself, is compatible with other ceramic materials, and provides the following benefits: